On International Human Rights Day, the Stansted 15, who stopped a brutal and illegal deportation flight in 2017, were convicted for 'endangering an aerodrome', a terrorism-related law.

Throughout their nine week trial for what many human rights defenders see to be grossly inflated charges, the activists were supported by Chelmsford Quakers. This is how they came to be involved.

According to Jean, a Friend from Chelmsford, the town's local Quaker meeting has tended to be a small and quiet one. Beyond the weekly meeting for worship, in recent years some members have become active in groups that help people navigate the UK's government inhumane and profit-driven immigration system. Through these groups, Friends are involved in running a crèche to enable Afghan women to go to English lessons, and teaching English.

Early in 2018 the meeting heard about Sanctuary Everywhere, the racial justice programme run by Quakers in Britain. The programme supports Quakers to create a culture of welcome and hospitality, oppose racism in all its forms, and change the law around deportations and removals, detention and destitution. For Jean and Friends at Chelmsford Meeting, the decision to become a Sanctuary Meeting was a simple one.

In March 2018, a trial began at Chelmsford Crown Court. The group on trial had prevented an immigration deportation flight at Stansted in 2017. For Chelmsford Quakers, the decision to support the defendants as a meeting was obvious one. Not only did they support the action taken by the group – dubbed the Stansted 15 – but Chelmsford Quaker Meeting House is large, with lots of rooms, and within walking distance of the courthouse. The place quickly became a sanctuary for the defendants and their supporters.

The meeting did not just look after the defendants physically by providing accommodation and food, but also spiritually, upholding them in meeting for worship. This upholding is appreciated, as the group are spiritual people and one of the 15 is a Quaker member of Brighton Meeting. They meet to practice yoga together, and some attend meeting for worship.

A wealth of approaches

As well as inviting the defendants into their homes and Meeting House, local Quakers held small demonstrations and silent vigils outside the courthouse, raising awareness of forced deportations and supporting those on trial in a more visible way. Brian Wardrop, the Clerk of the meeting, was a regular presence outside the courthouse (offsite link).

Not all Quakers in the meeting identify as activists, so this suited some more than others, but all are able to engage in the work in some way. Whether local Quakers were outside the courthouse or simply cooking meals for the defendants, the #Stansted15 have built a community spirit in the meeting. Through action, meeting members have made connections with people from migrant backgrounds in their community. They have also become more aware of their own privileges, and explored what their testimony for equality looks like today.

The UK's immigration system is broken and out of control. Immigration detention, deportations, and enforced destitution for asylum seekers need to stop. Actions like the one taken by the #Stansted15 are powerful, but not for everyone. We need to make the most of all the different ways we can support each other. Show up to demos, write to MPs about immigration policy, and share news that help others understand the state-sponsored violence some people face every day through deportation flights.

Find out more about the Sanctuary Everywhere programme 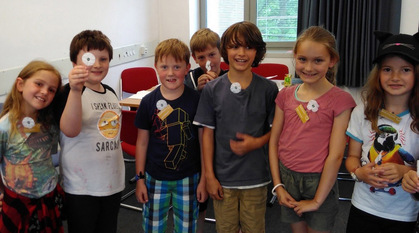 Shaping our future: children and young people at Yearly Meeting 2018

Younger voices have long played a part in Quaker decision-making. This year it's particularly important their voices are heard, says Howard Nurden. 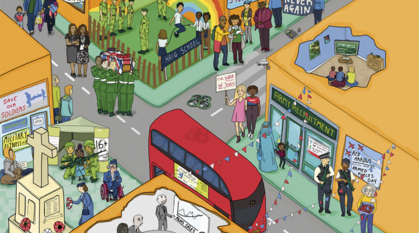 A new poster is opening up difficult conversations about militarism in and out of the classroom. 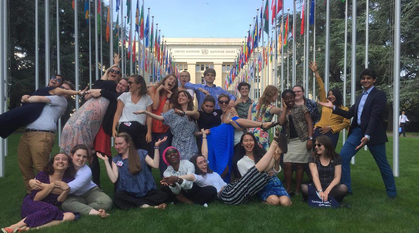 Faith Biddle reflects on how her experiences at the Quaker United Nations Summer School reignited the desire to build a better world.