Bearing witness against fracking in Lancashire

Wendy Hampton of Pendle Hill Area Meeting tells the story of how the Pendle Hill worship for witness against fracking came about from the ministry of one Friend, through the support of many.

Stephen Lee, a Friend of Clitheroe Local Quaker Meeting, had never been to a protest before he attended an anti-fracking demonstration in 2016. The atmosphere and sense of community stayed with him and inspired him to attend the Quaker Peace & Social Witness (QPSW) Activist Gathering in December that year.

As a Lancashire resident Stephen knew that fracking licences had been issued for his local area. After that first anti-fracking protest, over time the Quakerly significance of Pendle Hill – the landmark at the heart of land licensed to be fracked – led him to a sense of needing to take action.

Stephen sat with this response, waiting until he felt clear about his ministry. He heard the call and recognised that he needed support to help the meeting for worship to happen. He did not intend to, but after meeting he felt bound to speak and shared his vision of a meeting for worship to witness against fracking to be held on Pendle Hill.

Local Friends encouraged Stephen to set the date for the event, so that it would happen even if it didn't become a broadly held Quaker concern. He settled on Saturday 6 May. It had been May when George Fox climbed Pendle Hill, 365 years before, and seen his vision of "a great people to be gathered". That date made it feel real. From that point on, QPSW helped to plan, organise and publicise the meeting.

With the encouragement of local Friends Stephen took this personal concern to the local business meeting through the clerk. Clitheroe Quakers recognised and adopted the concern, then sent a minute to area meeting, which had happened to have drafted a minute for Meeting for Sufferings, the national Quaker representative body, on the topic of preventing fracking. The minute from Clitheroe Quakers excited our enthusiasm on its arrival.


We had sent a similar minute three years earlier but our sense was that the time had come for further more urgent action. In our January area meeting a formal minute was accepted offering area meeting support for and commitment to the Pendle Hill action. This minute allowed QPSW to prepare papers for Meeting for Sufferings in February; and that meeting agreed to a national Quaker campaign against fracking.

The local meeting supported Stephen by doing practical things like ordering leaflets and yellow hi-vis vests, doing radio interviews, and writing to the paper and the Friend. The area meeting made a page on the website for information, collected route maps and other local information visitors might need. QPSW supported the work by dealing with enquiries, advertising and publicising the event, and coming up on the day with banners and energy to take part in the meeting.

Stephen says he was kept going by local friends, by QPSW "who were brilliant", and even by a mocking letter that confirmed for him that he was doing the right thing. The feeling was that if there are Friends among us who are not aware of the damage fracking will do, there is a huge need to raise awareness of that, for us and for the world.

The day of the meeting

Dry weather greeted us on 6 May, as Friends and supportive groups travelled from places as distant as Cornwall and the Scottish Highlands, arriving by train, bike and public transport as well as by road. More than 100 people, carrying flags and banners, reached the summit for the meeting for worship; other groups gathered together for their own worship on the grassy slopes below.

We were supported in spirit by Friends who were holding the witness in prayer, in this country and in Bonn, where the Europe and Middle East Section of World Friends were meeting. There were minutes of support, emails, a donation to help with expenses, photographs of others in Devon doing similar witness, local radio and press, and recordings by Friends House staff, which can be heard on the Q:Witness podcast.

The meeting was a moving witness to our collective stand against the fracturing of the earth and also to how the faithfulness of a single Friend can develop into to a shared concern. 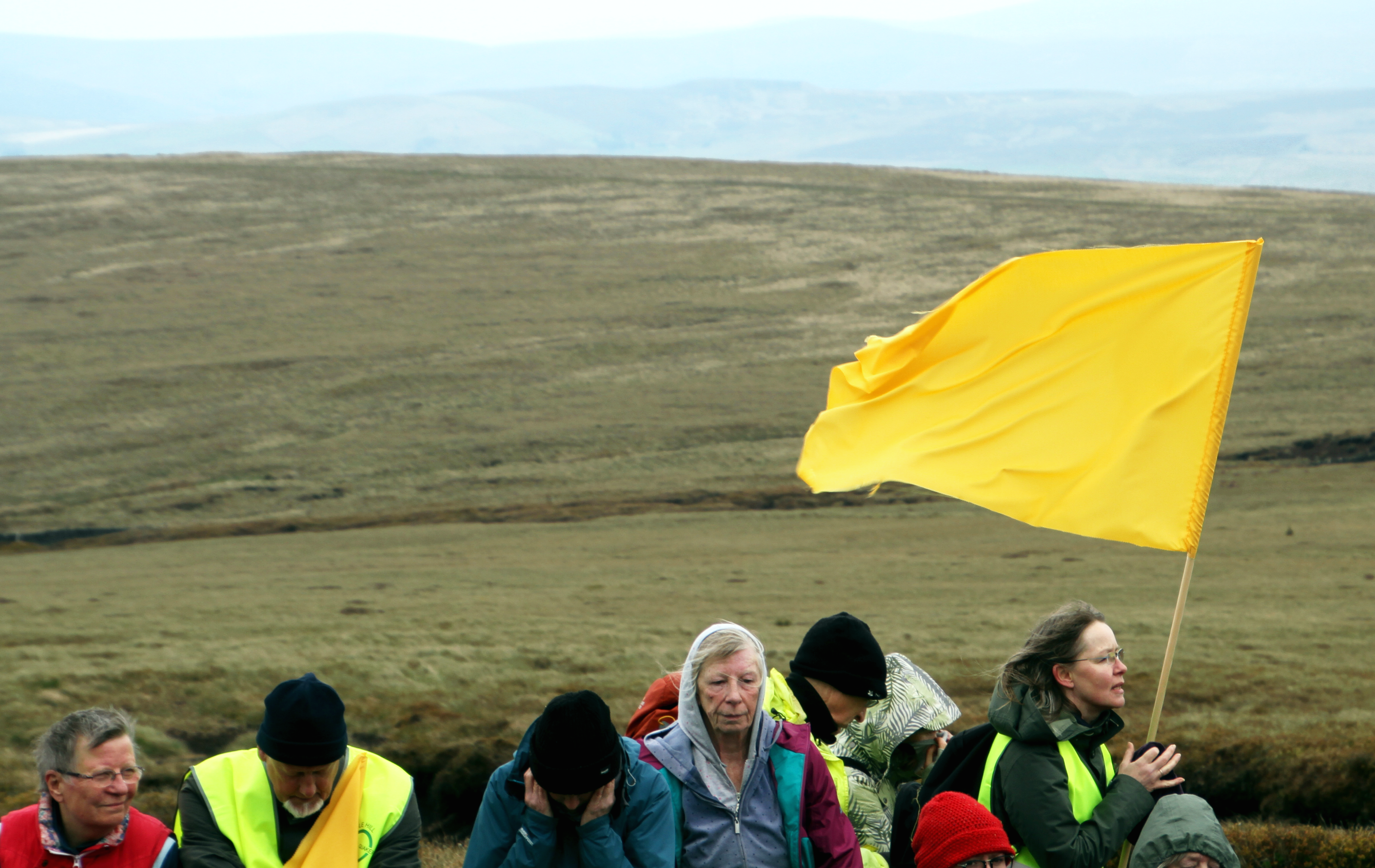