Quakers advocate for just economics systems that sustain people and the planet.

We face interconnected challenges: extreme inequality and environmental destruction. Both are caused by an economic system founded on exploitation of people and of the earth.

Quakers in Britain are working to challenge this system and advocate for economic values rooted in equality, justice and sustainability.

What is climate justice and how can we take action to secure it? View this resource online.


People who have benefited the least from the fossil fuel era are now suffering the most from the impacts of climate breakdown. They are overwhelmingly poor people, particularly women and people of colour. These people have also been marginalised through economic exploitation and racism throughout history.

Working against this inequality is climate justice.

Economic and political decision makers, including in the UK, are failing to take sufficient action on the climate crisis, and are not placing people and justice at the heart of their decision-making. They are also choosing to continue our dependence on extractive and high-emissions industries. Find out about our current climate justice work.

A green and just recovery

Quakers in Britain are urgently calling on the British government to legislate for a green and just recovery from the Covid-19 pandemic. This campaign is called Build Back Better (offsite link) and is jointly held with coalition organisations, including Friends of the Earth and the New Economics Foundation.

We also work with the COP26 Coalition and Faith for the Climate network, campaigning for a global transition beyond fossil fuels. To be just, this global shift away from fossil fuels must prioritise the rights and voices of people facing the worst impacts of climate breakdown. Find out more about our work on a green, fair and global post-pandemic recovery.

Quakers across Britain are taking climate action at local level and advocating for change. As an organisation, we support their activism. This ranges from divesting from fossil fuels, to taking direct action, to lobbying local decisionmakers.

Our support for Quaker activists in many forms, such as workshops for young Quakers, coordinating Quaker involvement in national campaigns, and supporting Quaker demonstrations. Learn more about the spiritual roots of Quaker climate activism, and how to get involved.

Quakers in Britain have developed a broad library of resources that support Quakers with their work on creating a green and just new economy.

6 principles for a green and just recovery

We need to come together to ensure that climate justice is central to the post-Covid future of our economy, says Olivia Hanks. 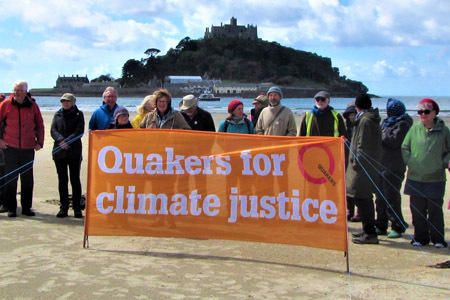 Quakers and other faith groups all over the UK took action for climate justice at COP26. Find out more! 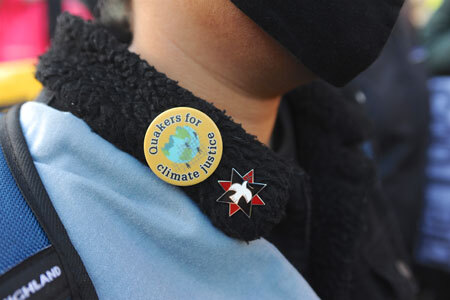 If you've ever wondered what climate justice means or how to practice it, take a look at our new project.

Get updates on our work, opportunities for action, and stories of witness by signing up to our monthly Quaker Faith in Action email newsletter.

Share action you've taken, and find out what other Quakers are doing, on the Our Stories blog.