The American Friends Service Committee (AFSC) and Quaker Peace & Social Witness (QPSW) have nominated two organisations – Mwatana for Human Rights and Campaign Against Arms Trade (CAAT) – for the 2021 Nobel Peace Prize. In 1947, the Nobel Peace Prize was awarded to the Friends Service Council (the precursor to QPSW) and AFSC on behalf of Quakers worldwide for their work during and after the two world wars to feed starving children and help Europe rebuild itself. The organisations use their nomination to highlight the work of others continuing the vital work of peacebuilding.

“The timing of this nomination is intended to draw attention to the Judicial Review being conducted in the UK about arms trading in Saudi Arabia, to support protests in the US about renewed arms sales to the UAE, and to highlight the misery and suffering of the Yemeni people in the proxy war being conducted in their country," reads the nominating letter. “The pairing of the two organisations is intended to hold up collaborations between local organisations and activism with initiatives by civil society to engage policy and law making through legal and diplomatic channels."

International solidarity has helped heal some of the scars that have clung to our souls, helped us continue our work, and fed our hope that we will see a just Yemen without war.

Mwatana for Human Rights is a grassroots organisation working in Yemen to defend human rights. In addition to reporting on violations committed by the parties to the conflict and the various authorities, Mwatana publishes the results of its investigations in multiple publications. Mwatana also provides legal support and advice to victims of arbitrary detention and enforced disappearance, in addition to implementing advocacy activities and campaigns at the international level and among decision-makers. The organisation also works to ensure accountability for violators and justice for victims. Established in 2007, they were able to expand their work when they were granted a government permit to operate in 2013.

“'Information is power,' that's what Mwatana believes," said Radhya Almutawakel, the chairperson of Mwatana. “Despite the difficulty of collecting painful stories and the dangers that come with the work, Mwatana's team remains dedicated to raising the voices of victims and building a human rights memory. This memory is the cornerstone of Mwatana's work in advocacy, legal support, and the pursuit of justice and redress for Yemen. Our human rights work is our way of advancing peace, and our accountability efforts are how we seek to make any peace in Yemen durable. Throughout the war, international solidarity has helped heal some of the scars that have clung to our souls, helped us continue our work, and fed our hope that we will see a just Yemen without war. The team said they felt their strength was reinforced when they heard AFSC and QPSW had nominated Mwatana for Human Rights and CAAT for the 2021 Nobel Peace Prize."

CAAT is a UK-based organisation working to end the international arms trade. CAAT has leveraged local information, such as that provided by Mwatana for Human Rights, in a legal case brought against the UK government, winning a significant victory in 2019 in bringing about the cessation of arms trading to Saudi Arabia for a period of several months.

Dana Aboul Jabine, Campaign Against Arms Trade, said, “We are honoured that American Friends Service Committee (AFSC) and Quaker Peace and Social Witness (QPSW) have chosen to nominate Campaign Against Arms Trade (CAAT) and our partners Mwatana for Human Rights for the 2021 Nobel Peace Prize, in recognition of our work towards ending UK arms sales to Saudi Arabia. Yemen is on the brink of a famine and the UN has stated that it remains the worst humanitarian disaster in the world and yet UK-made fighter jets continue to drop UK-made bombs, killing and maiming civilians, targeting hospitals, homes and schools. As we launch a new Judicial Review that challenges the UK government's appalling decision to resume arms sales to the Saudi-led coalition, we are grateful to AFSC and QPSW for highlighting our work, in solidarity with the people of Yemen, towards ending these sales once and for all."

Oliver Robertson, Quakers in Britain, leads Quaker Peace & Social Witness. (QPSW is the successor body to Friends Service Council.) He said, “Because Quaker faith sees every person as precious and a child of God, we're driven to highlight forgotten conflicts around the world. The conflict in Yemen may be out of world headlines but its devastation and destruction continues. 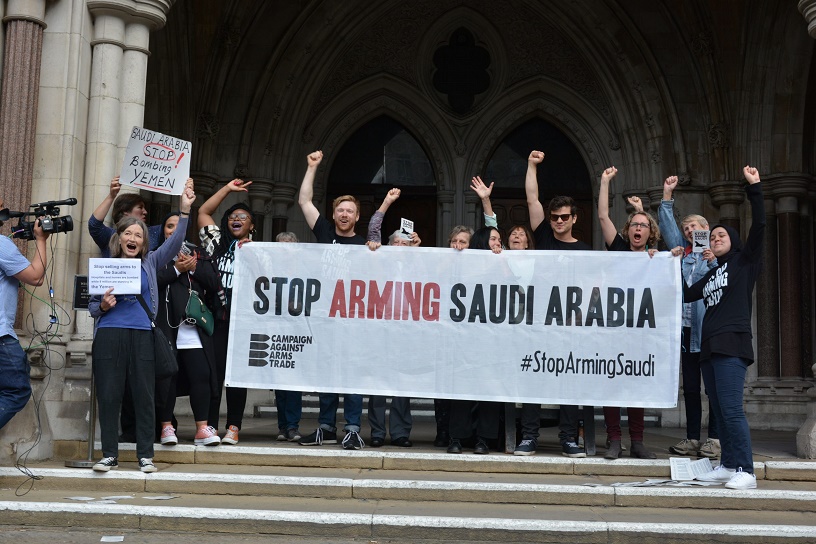 “We hope this nomination will not only highlight the excellent work for peace by Mwatana and CAAT, but also encourage others to shut off the flow of armaments and instead work hard to build a sustainable peace in Yemen.

“As our faith led Quakers to do the relief work for which we were awarded the Nobel Peace Prize in 1947 so we want to recognise the dedication, faithfulness and respect for humanity of all that is accomplished and which we in turn nominate."

AFSC and British Friends Service Council accepted the 1947 Nobel Peace Prize on behalf of Quakers worldwide. The prize recognised 300 years of Quaker efforts to heal rifts and oppose war. In particular, it named the work done by the two recipient Quaker organisations during and after the two world wars to feed starving children and help Europe rebuild itself.