Negotiations at the United Nations which could lead to a global ban on nuclear weapons conclude today (Saturday 1 April). While the UK Government is staying away and the British media is – so far – taking little interest, Quaker Tim Wallis reports here his daily highlights.

Led by faith to say that all killing is wrong, Quakers have long campaigned for the eradication of nuclear weapons. In 1955, the decision making body, Meeting for Sufferings said, “We believe that no one has the right to use [nuclear] weapons in his defence or to ask another person to use them on his behalf. To rely on the possession of nuclear weapons as a deterrent is faithless; to use them is a sin." (Quaker faith & practice 24.41).

Today, Tim Wallis is off to New York. He takes with him a powerful statement from five major churches to commend and uphold those countries from across the world for their moral courage in joining the vital talks.

He is representing these churches who made the statement, Quakers in Britain, The Baptist Union of Great Britain, the Church of Scotland, the Methodist Conference and the United Reformed Church, as well as Quakers worldwide through Friends World Committee for Consultation.

To rely on the possession of nuclear weapons as a deterrent is faithless; to use them is a sin.

The Nuclear Ban Treaty conference runs from Monday to Friday (27 to 31 March ) in New York.

Tim is programme manager for Quaker Peace & Social Witness, working on Peace and Disarmament and he is author of “The Truth about Trident". Follow his highlights here.

Tim Wallis writes: The UN's very first resolution was passed unanimously on 24 January 1946, calling for a global ban on the use of nuclear power as a weapon of war. The resolution came just months after nuclear weapons were used for the first time on human beings in Hiroshima and Nagasaki, demonstrating to the world the catastrophic humanitarian consequences of these weapons.

It has taken the UN more than 70 years to come to terms with the fact that the five permanent members of the Security Council, with the power to veto most decisions of the UN, have no intention of giving up these weapons, despite their promises and fine words and the universal condemnation of these weapons by the overwhelming majority of the world's population.

Today, for the first time, the world's majority are being represented in negotiations to ban nuclear weapons with or without the agreement of those nine countries who still insist on their right to have them and potentially to use them.

The statue, outside the UN building in New York, represents not only the moral authority of the world's nation states to do the right thing, and declare these weapons immoral, illegal and unacceptable. It also represents the moral courage of those countries from all over the world, large and small, who are standing up to the nuclear 'bullies' and refusing to give in to their pressures.

The nuclear dragon will be slain, and history is being made here today.

Tim Wallis writes: More opening speeches from official delegates and civil society representatives, as well as the start of actual negotiations on the content and substance of a treaty that will ban nuclear weapons.

Civil society's contribution to the negotiations is very limited, and although I tried to get permission to read out the UK churches' statement, this was not accepted. Instead, an international interfaith statement, coordinated by Pax Christi International, SGI International and the World Council of Churches, was read out, by Jasmin Nario Galace of the Philippines.

Paul Parker, on behalf of Quakers in Britain and Douglas Shaw on behalf of Northern Friends Peace Board were signatories to the international statement.

Meanwhile, I was able to photocopy and distribute our own UK statement to all the official delegates from around 120 countries to the negotiations. Many of them expressed their appreciation for our support as UK churches for their efforts here.

At a colourful vigil outside the UN, we held pieces of the interfaith 'ribbon' that once encircled the Pentagon and has been used on peace demonstrations around the world.

- Tim Wallis at the United Nations

Tuesday afternoon, we held a side event at the UN attended by around 30 people, chaired by Dave Webb, CND. Janet Fenton, of Scottish CND and NFPB, MP Fabian Hamilton and I were the speakers.

The Irish ambassador hosted a reception for all official and unofficial delegates. A great opportunity to lobby and thank some of the delegations.

Tim Wallis writes: Today, I will be meeting the UK's disarmament expert at the UK Permanent Mission to the UN. The Ambassador Matthew Rycroft is unable to meet us as he is acting as President of the Security Council, a rotating responsibility. 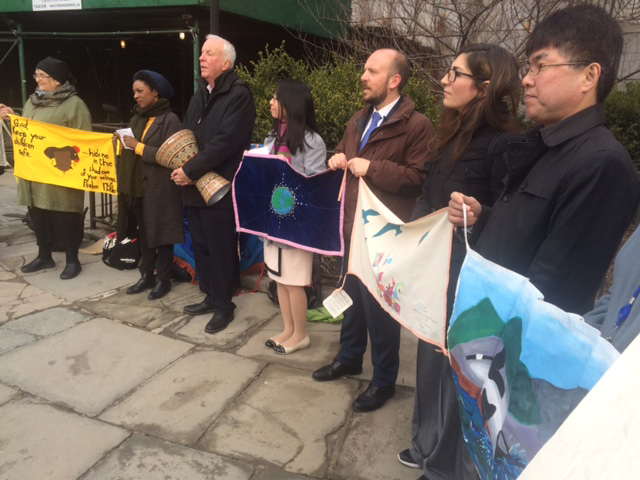 This morning we held a colourful vigil outside the UN, led by SGI Buddhists, Unitarians and the United Religions Initiative. We held pieces of the interfaith 'ribbon' that once encircled the Pentagon and has been used on peace demonstrations around the world.

I am writing to Belize, Bahamas and St Vincent to encourage them to attend the next negotiations in June, and to Grenada and Guyana to thank them for being here. There have been 120 countries taking part so far, but we want more!

Tim Wallis writes: Our meeting at the UK Permanent Mission to the UN yesterday was cordial and respectful, despite our divergent views on the negotiations taking place around the corner at the UN.

A recent opinion poll in France has shown that nearly as many people in that country want their government to be taking part in these negotiations as in the UK (74%).

This morning's interfaith prayers were led by the World Council of Churches. Followed by a public 'action' outside the UN, involving a 'ban the bomb' message and two people dressed up as nuclear weapons. Tomorrow morning Quakers will lead a short meeting for worship outside the UN at 8.00am (New York time), 1.00pm BST.

Day four of the negotiations has been set up as an informal interactive session for delegates from more than 100 countries putting questions to a panel of civil society experts from the International Committee of the Red Cross, the International Association of Lawyers Against Nuclear Arms and the Women's International League for Peace and Freedom. This is an experimental departure from the normal format of UN negotiations and it will be interesting to see how that develops.

Tim Wallis writes: Alice Slater, an international legal expert from New York, has been taking part in UN nuclear negotiations for over 40 years. She was involved in the negotiations which led to the Non Proliferation Treaty in 1970 as well as negotiations in the Conference on Disarmament ever since.

We gave thanks for this new spirit of cooperation and unity that is developing at the UN in relation to nuclear weapons.

Alice told us that never in 40 years has she ever seen the level and quality of discussion and listening, which took place in Conference Room 4 at the UN yesterday.

Delegates from 100 different countries, who normally issue statements to each other and come with very fixed and pre-determined positions set by their respective governments, were instead engaged in an informal dialogue with each other - asking questions, listening, re-formulating their positions and even changing their views in the light of what they were hearing.

According to Alice Slater, this was unique and unprecedented in this history of UN negotiations on the issue of nuclear disarmament. 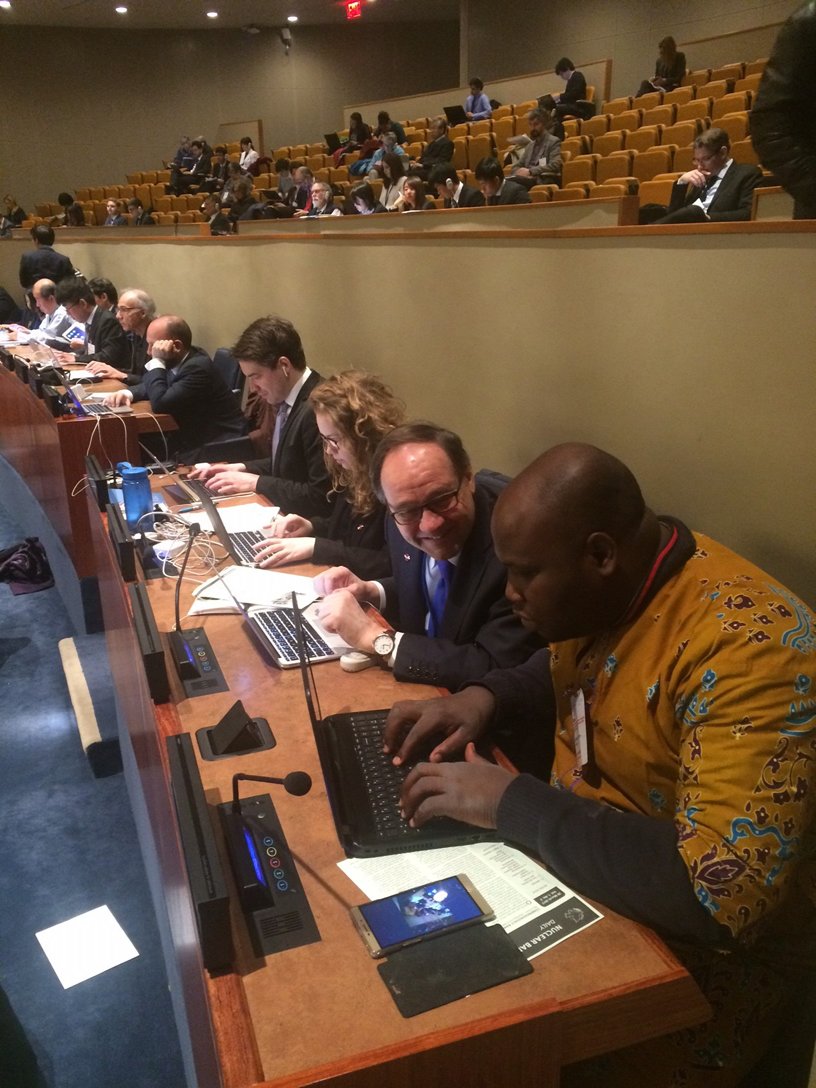 This morning, we gave thanks for this new spirit of cooperation and unity that is developing at the UN in relation to nuclear weapons - in the absence of the nuclear weapon states who are boycotting these negotiations.

This has been an historic week at the UN. The purpose of this first week of negotiations for a nuclear ban treaty was to give UN member states the opportunity to express what they want to see in such a treaty and to get all the possible differences of opinion out on the table.

Delegates from 132 countries made statements or took part in the discussions this week, providing the president of the negotiations, Elaine Whyte of Costa Rica, with ample material from which to produce a first draft of the treaty. There are, of course, some divergent views on this topic from such a large number of countries. However, there is clearly more that unites these countries than divides them.

In the absence of the nuclear weapon states and the majority of the 'nuclear allies' of the US, it was surprisingly easy for the vast majority of the rest of the world to agree that a new treaty must unequivocally and unambiguously prohibit everything to do with nuclear weapons as incompatible with international humanitarian law and the moral fabric of an increasingly interdependent world. 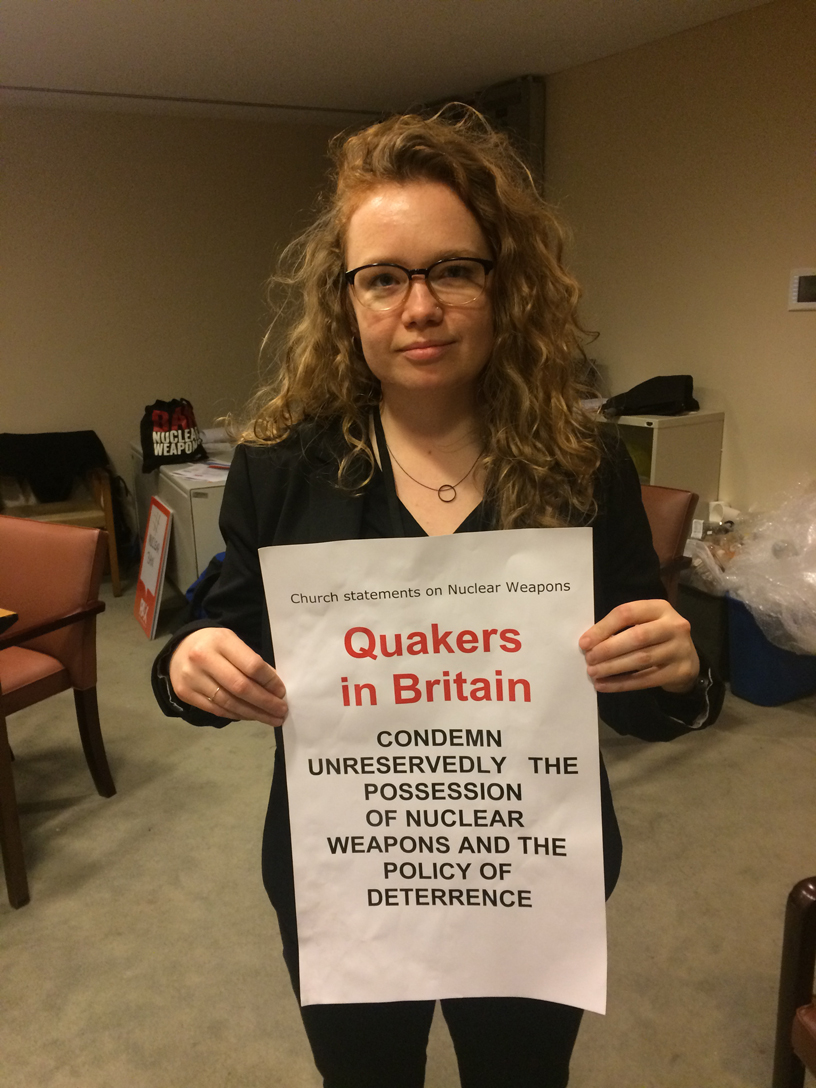 There will no doubt be some difficult negotiations in June over exactly what that means in practice. But those governments, like our own, who are hoping that countries will not be able to agree on a strong and legally binding treaty to outlaw nuclear weapons, are likely to be disappointed.

After the positive and productive spirit of cooperation during this first week of negotiations, there is an overwhelming sense here that a treaty will be ready for signing by 7 July, when these negotiations are due to end.

Sadly, the world's media continues to think that the 'story' here this week is that the US, UK and a handful of other powerful states have been boycotting this meeting. The real story is what has been going on inside!