The promise made to the millions of people slaughtered by the hideous mistakes of World War I was 'never again'. World War I revealed that humanity is horribly capable of creating hell on earth.

Here we are one hundred years since that promise was made and what have we witnessed in those hundred years? Have we ended war and have we honoured all those who died?

The shadows of the world wars have shaped the lives of millions. The legacies of and the causes of violent conflict are intertwined. Justice, equality, respect for human rights and care for the planet are all affected by war whilst the absence of them sows the seeds of current and future conflicts.

Modern warfare is failure on a colossal scale. War is failure to love our neighbours as ourselves; failure to love our enemies and to do good to those who hate us; failure to seek peace and pursue it; failure to leave no stone unturned in the search for a peaceful solution; failure even to imagine the limitless possibilities of peace that are before us; failure of governments to protect us through dialogue and diplomacy; failure of parliaments to uphold the basic principles of international law and ethical norms which call for utmost restraint in the spilling of blood; failure of military strategies and policies of 'deterrence' which are supposedly offered to us as a means to prevent such wars.

Some of us alive today are a testimony to the alternative war story: the story of conscientious objectors. These are the stories of those who offered a compassionate hand through medical relief, of those who worked to create alternative forms of service and of those who absolutely refused to take part in hostilities in any form.

My grandfather served in WWI and he was placed in what was called the Pioneers. It sounded like a grand name but the reality was he was required to be a gravedigger. My mum said that he never recovered from the horror of what he had to do – as a young man to bury so many of his friends.

I have worked all my life for peace, in Palestine, Egypt, Northern Ireland, former Yugoslavia, Lebanon, East Africa and in the USA at the United Nations. I can tell you from the heart and from my experience that there are always people working for peace, whatever the media tells you. Humanity may be capable of the most terrible things but there are always people who are protesting, challenging and engaging in policy to make the world a better place.

Some claim that war is glorious and just but there are always other stories. The possibility of peace is constantly with us.

Peace isn't only important when we are at war. We need to be active peacemakers and peacebuilders at all times. There is plenty of expertise and knowledge available from those who have gone before us. There is now a wealth of training in nonviolent conflict resolution available to all. Children can learn to be peer mediators, peace is possible for all ages.

Let us recommit to peace and all look forward to 100 years of peace for our children and our children's children so that in 2118 they can stand tall and say 100 years ago we consigned war to history. 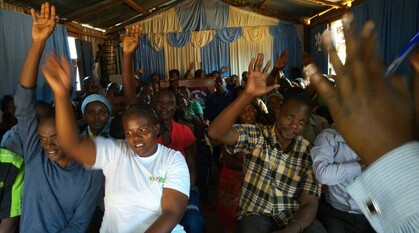 Elections in Kenya: Working nonviolently against another 2007

Amid the violence following the presidential election in Kenya, Tobias Wellner shares how Turning the Tide Kenya is trying to change the way people engage with politics. 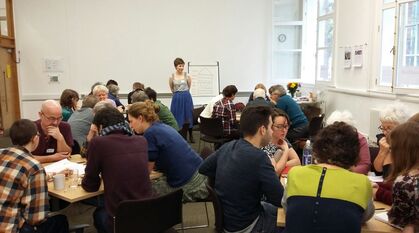 Kat Wall harvests insights that emerged from a weekend-long training for Quakers who wish to build a new economy. 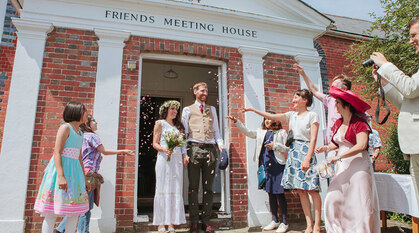 What to expect from a Quaker wedding

Michael Booth has been a guest at many Quaker weddings. Here, he looks at what makes them so special.