Quakers in Britain have been considering sexuality for more than 60 years. In 2009 we made the decision to campaign for the right to marry same-sex couples in Quaker meetings for worship.

For many years Quakers in Britain had been considering same-sex relationships. As Quakers we are called to answer that of God in everyone. This leads us to campaign for equality and justice in society, recognising the inherent worth of each person.

Following the decision in 2009 Quakers supported and campaigned for marriage equality. This was done with extensive consultation with Quakers around the country. In England and Wales this was achieved with the Marriage (Same Sex Couples) Act which passed in 2013; in Scotland with the Marriage and Civil Partnership (Scotland) Act 2014.

It is the nature and quality of a relationship that matters… the same criteria seem to us to apply whether a relationship is heterosexual or homosexual.

It was a long, challenging journey towards this decision. In 1963, the booklet Towards a Quaker view of sex stated, "It is the nature and quality of a relationship that matters… the same criteria seem to us to apply whether a relationship is heterosexual or homosexual."

In 1988 Meeting for Sufferings, then our national executive body, recognised same-sex relationships and suggested that individual meetings might celebrate them.

Following the 2004 Civil Partnership Act, which permitted the civil registration of same-sex relationships, many Friends began to express unease. The ability of Quakers to recognise marriage in a religious context was excluded from the terms of civil partnership. The issue was then considered at various levels of our Yearly Meeting over several years.

After consulting all British Quaker meetings in 2007 the group appointed to review current opinion reported, "There is overwhelming evidence that attitudes have changed significantly in recent years, even since our current book of discipline [Quaker faith & practice] was published in 1995."

In 2008 Meeting for Sufferings recommended that the Yearly Meeting, "consider how we should celebrate and recognise committed relationships within our Quaker community and what revisions to Quaker faith & practice would follow from this to include same-sex partnerships." 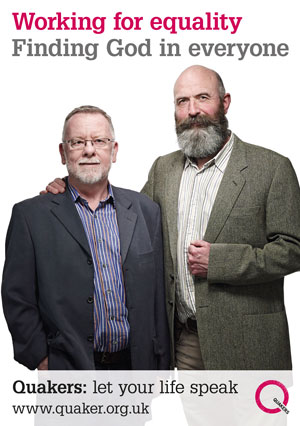 One of the subjects considered at Yearly Meeting in 2009 was our continued concern to celebrate committed relationships. Many spoke of their experience in the life of Quaker meetings saying that the gift of marriage was already being given to same-sex couples as well as opposite-sex couples. This led us to a profound compulsion to act. Yearly Meeting decided to seek a change in the law so that same-sex marriages could be held in Quaker meeting houses in the same manner as opposite-sex marriages, and that they would be recognised as equally legally valid.

This culminated in the extensive campaign work of Quakers and other faith groups until the Marriage (Same Sex Couples) Act was passed in 2013 and the Marriage and Civil Partnership (Scotland) Act in 2014.

Quaker marriage is for members and those who, while not in formal membership, are in unity with the religious nature and witness of Quakers in Britain. A Quaker marriage takes place during a specially arranged meeting for worship. The couple take each other as partners in a lifelong commitment to faithfulness and love. Each makes the same declaration, using these words:

"Friends, I take this my friend, [name], to be my spouse*, promising, through divine assistance [or "with God's help"], to be unto him/her/[commonly used name] a loving and faithful spouse*, so long as we both on earth shall live."

*the word 'spouse' may be replaced by 'wife', 'husband' or 'partner in marriage'.

Same-sex couples who are civil partners and wish subsequently to convert this to a marriage in a Quaker meeting for worship may do so where this is permitted by law.

For the right joining in marriage is the work of the Lord only... we are but witnesses.

"Two hundred years ago, an earlier generation had yet to learn that the practice of slavery was an injustice to our fellow human beings. Today we are amazed that they did not recognise this until visionaries showed them that it was so. We believe that two hundred years from now, those who follow us will be equally astounded to discover that in the twenty-first century we had still to realise the full equality of lesbian and gay people." – We are but witnesses (PDF), September 2009

Much of the language we use in society has changed since the statements and books referred to on this page were written. We hope to learn and grow together as we continue to live out the Quaker testimony to equality as a loving and faithful community.

Quaker marriage procedure and quotations on marriage can be found in Chapter 16 of Quaker faith & practice (offsite link).

We are but witnesses: Quakers and marriage equality (PDF) – Marriage equality and the theological underpinnings of the decision of Britain Yearly Meeting of the Religious Society of Friends to recognise same sex marriages (2009)