Quakers are working with others to expose and challenge the new tide of militarism in Britain.

Militarism is the belief that a country should maintain a strong military capability and be prepared to use it aggressively to defend or promote national interests. It is also the accompanying practice of preparation for war. This makes the world less, not more secure. Investment should be channelled into the humanitarian, peacebuilding and development efforts that will wither the roots of war and build true security.

This pack is a toolkit for action. With inspiring case studies and campaign guides, Take Action on Militarism will help you challenge the normalisation of war in policy, the media, education and across society.

While militarism has existed in Britain for a long time, in recent years increasing resources have been devoted to it, the arms race has intensified and the promotion of militarism across society has also increased. Military careers are publicised in schools and through services for young people. In 2009 the UK government created Armed Forces Day.

Quakers in Britain and Quakers in meetings around Britain challenge the squandering of resources on militarism, the new arms race (competitive increases in military capability, including the development of ever more devastating weapons of mass killing) and the embedding of military values by increasing scrutiny of militarism in public life, and by helping to build a new culture of peace and nonviolence.

The destructive and wasteful character of militarism is laid bare by the fact that average annual government spending planned for the period 2021-25 is £47bn for the military and weapons of mass destruction, and just about £6bn for reducing UK carbon emissions.

Social resources should be directed away from militarism, which makes the world less safe and less peaceful, towards peacebuilding, healthcare, mitigation of the climate crisis and other vital public services that create real security and increase social resilience.

Alongside Quakers across the country and others in the peace movement including the Global Campaign on Military Spending UK (offsite link) and Rethinking Security (offsite link), we are working to raise awareness of the many costs of militarism, and to advance the cause of demilitarisation and disarmament on which true peace and security depend.

If you are interested in holding a meeting for learning on how we can build community support for demilitarisation, or in otherwise getting involved in this work, please contact Daniel Jakopovich, Peace and Disarmament Programme Manager, at danielj@quaker.org.uk.

Host a screening of War School


The documentary War School: the battle for Britain's children takes a close look at militarisation in Britain. Made by POW Productions, the film features interviews with former soldiers and Quakers in Britain staff who work on countering militarism.

How does war affect those who leave military service? How do the armed forces share military values with schoolchildren? What role does the government play in the culture of valorising war? War School explores answers to these difficult questions. The questions raised are explored through interactive learning resources from the Peace Education team including a comic book available to download.

After a successful series of screenings in 2019, the film has been made free-to-view online.

Watch the trailer here to get a flavour of the film.

The Unseen March is a short film from Quakers in Britain. It brings together voices from education, the armed forces and public life, and it questions the creeping militarisation of schools. Send it to a friend to help spread awareness of the issue.

Produced by Quakers in Britain and Forces Watch, this pack (PDF) looks at key aspects of British society where military values are present, including Armed Forces Day, armed forces recruitment of under-18s in schools, cadet youth groups, and Remembrance. It includes tips on how to make interventions when militarism crops up, and deepen people's knowledge of the issues.


Hard copies of the pack can be requested from the Quaker Centre Bookshop: quakercentre@quaker.org.uk or 020 7663 1030.

Read a blog piece by Daniel Jakopovich, Peace and Disarmament Programme Manager, on rebuilding society through peacebuilding and disarmament.

'The new tide of militarisation' resource

The new tide of militarisation briefing reveals the government's strategy to increase public support for (and willingness to pay for) the military, to make recruitment easier, and to stifle opposition to unpopular wars.

Quakers in Britain works closely with other organisations challenging militarism. 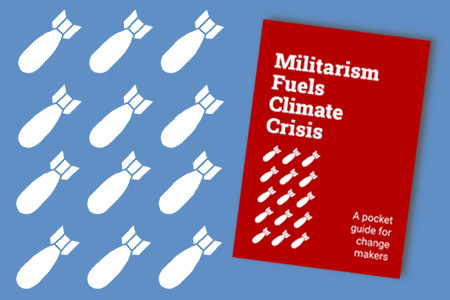 The Global Campaign on Military Spending UK, which QPSW is a part of, has produced a new campaigners guide, 'Militarism Fuels Climate Crisis'. Visit the website to download.