Susan Mitchell of Dunblane Meeting picks up the threads between migration, climate change and war.

I've always liked making things and over the winter months during lockdown the horizontal surfaces in our house became covered with all kinds of stuff – fabrics, wool, glue, paint and card. Out of the mess emerged some butterflies, bears and people chains! They have all gone their different ways – an influence for good, I hope.

I had got involved with craftivism; first with Sanctuary Everywhere and then with the Loving Earth Project. The LEP is a way of showing care for the planet we love and an important aspect of the work is the statement with each panel which addresses key questions: What or whom do you love that's in danger from environmental breakdown? How do you contribute to the threat and what can you do about it? What's the tiniest thing that you could do that would make a difference? What's the most radical thing that you could do?

As I reflected on these questions I felt that one big issue not being widely talked about was the contribution of the military to greenhouse gas emissions. Who was headlining this and why did I not know about it? I needed to find out.

Stuart Parkinson from Scientists for Social Responsibility, writes in The Carbon boot-print of the military about the direct and indirect effects of military activities and how emissions produced by the military are hard to quantify. The Paris Agreement in 2015 left the inclusion of military greenhouse gas emissions in a country's targets to the discretion of individual nations. Although the UK does include them, many countries do not.

Global military emissions, including the arms industry, are estimated to be around 6% – more than civil aviation at 5%. But the 6% does not include emissions from indirect effects such as fire, deforestation, rebuilding or healthcare, nor the loss and damage caused, so the total may be nearer 10%.

What is the cost of all of this? Not just financial but also the cost of diverting intellectual resources? Spending should be on the real threats – climate change and pandemics – not on wars. Yet, in the middle of a pandemic, eye-watering sums are spent on weapons.

In 2020 global military spending rose by 2.6% to almost $2 trillion and the UK announced an increase in military spending. ICAN reports that "$72.6 billion is how much nine nuclear armed countries spent on their nuclear weapons as the pandemic spread in 2020 and a global treaty banning nuclear weapons took full effect. The report Complicit: 2020 Global Nuclear Weapons Spending details the spending of these nine countries on their arsenals, the companies that profited, and the lobbyists hired to keep nuclear weapons in business."

This global misappropriation of funds needs a global solution. Unfortunately the Intergovernmental Panel on Climate Change (IPCC), the UN's scientific advisory body, has little to say on the subject of military carbon emissions, although it acknowledges that "Climate change can indirectly increase risks of violent conflicts by amplifying well-documented drivers of these conflicts such as poverty and economic shocks".

The Conflict and Environment Observatory (CEOBS) launched in 2018 with the primary goal of increasing awareness and understanding of the environmental and derived humanitarian consequences of conflicts and military activities. CEOBS has put together a call for action for governments to commit to cut military emissions at COP26 which the Quaker Council for European Affairs is supporting.

My research, as well as my work with refugees, led me to the conclusion that a vicious cycle exists between war, climate change and migration and I started to draw this out: 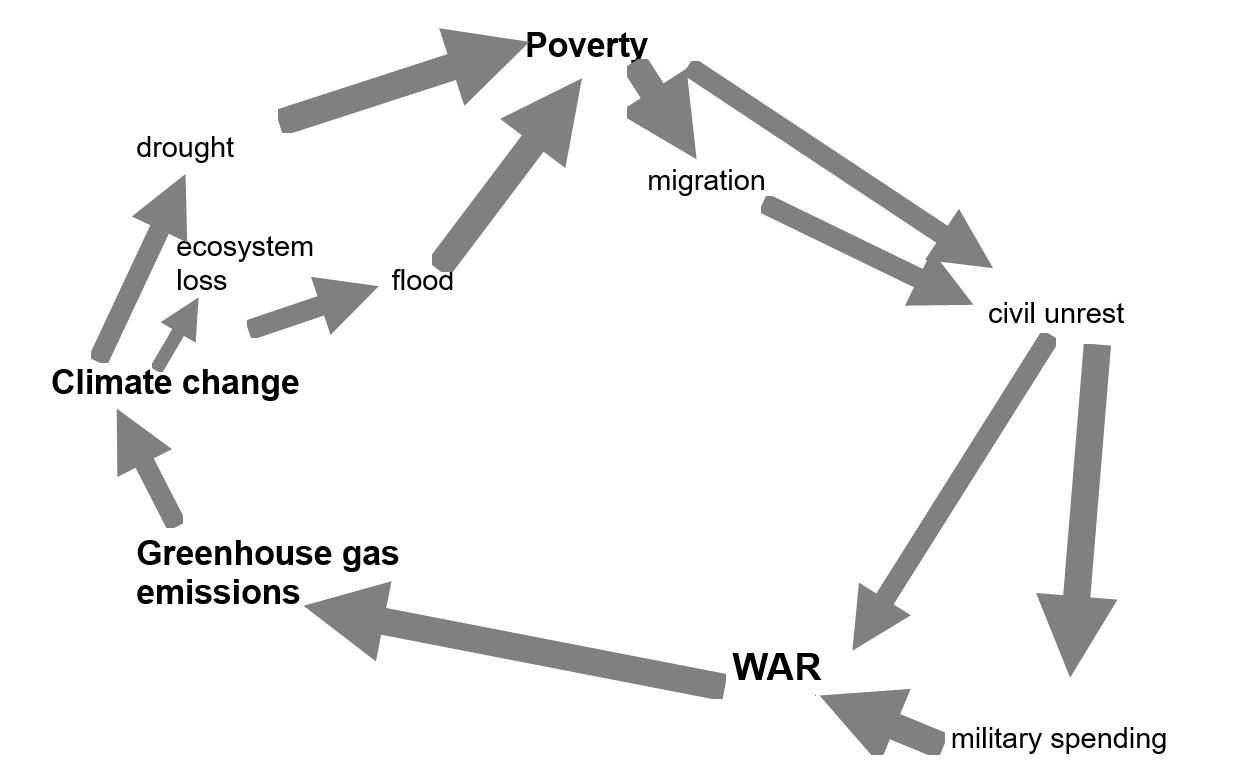 This may be too simplistic as there are certainly other factors operating, but for me it is a helpful way to keep the relationships in mind. It emphasises the connections between our peace testimony and our sanctuary and environment work. I hope that in the new QPSW strategy (PDF), migration and sanctuary will have an important place. 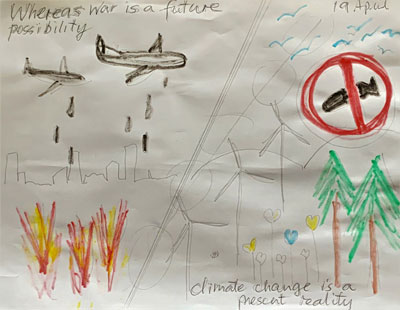 So how might I translate this information into fabric panels that would communicate both what I love and what troubles me? At meeting one Sunday a Friend mentioned Yuval Noah Harari, who writes, "whereas war is a future possibility, climate change is a present reality". Though this is true, sadly for too many people in the world war is also a present reality.

I made a sketch and shared it with my LEP group.

A Friend commented that it might work better as two panels and so I made the two panels shown above.

Participate in the Loving Earth Project