Quakers bring worship to protests against oil drilling in Sussex

In Quaker Week 2017 Louise Williamson helped unite protesters and Quakers in worship outside the gates of a new oil extraction site.

I remember noticing that something was happening at Broadford Bridge when steel doors and a chain link fence appeared at the side of a B-road I often drive down in rural Sussex. I didn't give it more thought until a piece in the local paper reported that people were protesting an oil company that had set up an extraction site there. There's actually no sign naming the little hamlet of Broadford Bridge as you pass through, it's only named on the map, and there are certainly no signs at the gate saying there's an oil well!

The protests happened at the gates every weekday and on Adversane Green nearby on Saturdays. I had meant to go one day to find out more, but it somehow didn't happen! Saturdays are so busy and I was still working full time then. But the newspaper article also mentioned a public meeting in nearby Pulborough, and I definitely intended to go to that. I'd met a keen environmentalist through my Quaker meeting, and she came along with me.

The company responsible for the drilling did not make an appearance at the public meeting, although they were invited - but about 300 local people did go. A geology professor spoke about acidisation, the extraction process used at Broadford Bridge. He highlighted the particular concerns about drilling there due to a major geological fault and the proximity to water flowing into local rivers. A trustee from the Campaign for the Protection of Rural England also spoke, highlighting the risks to ancient woodland and Sites of Specific Scientific Interest nearby. What was particularly a surprise to me was that various oil companies are planning the industrialisation of the whole Weald across Sussex and Surrey.

I signed up to be part of the Broadford Bridge Action Group at that meeting, and shortly after I retired in April, there was an appeal for people to join a protest at the site gate for the visit of investors with the press, so I went along to the site for the first time. I now join the protestors at the gate from time to time during the week, and Saturday afternoons usually find me at Adversane Green just up the road, highlighting the drilling to motorists on the busy A29. 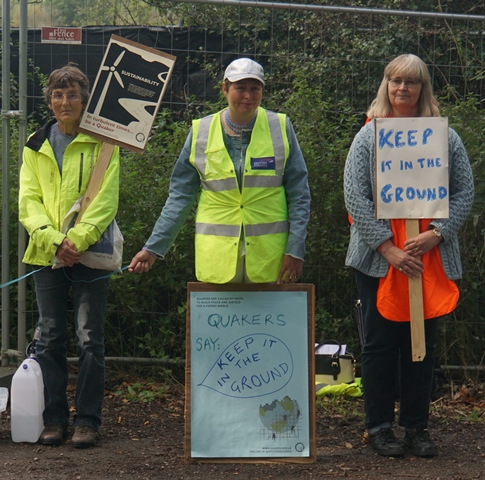 During Quaker Week we held a meeting for worship at the site, which was greatly appreciated by the regular protestors. Around 30 people took part, with local protesters joining the 15 Friends who came from many different meetings, including Dorking, Horsham and Brighton. One had even cycled from Oxted! We lined up in front of the steel gates, and held a long ribbon to symbolise our unity. Quaker Week balloons and placards decorated the gates, and together we experienced a deep silence even as the traffic thundered by.

After the meeting closed, a couple of local activists then spoke, updating us on new developments and thanking Friends for organising and attending the vigil. A couple of regular protesters commented that some of the more occasional supporters had come that day, knowing that the protest would be peaceful and feeling more confident because of there being greater numbers present.

There are several other places in West Sussex where drilling has begun or where licenses are being applied for. The first license to frack in the county has just been granted. This issue is not going to go away in England, although the decision against fracking in Scotland is really encouraging.

As the concern around this and other sites grows, local Quakers are planning to hold a vigil on a monthly basis, inviting members of other faith communities to join us. This will be a way to keep the issue alive and encourage more people to be active - not necessarily by protesting at the gate, but by talking to their neighbours, by writing to their MP, by supporting the campaign financially and so on. It's still the case that many locals have no idea what's going under their noses!

The actions around the site have prompted the local meeting I belong to explore new concerns. We're now planning a discussion in the New Year about how we could give a clearer sustainability testimony in our personal lives as well as collectively – whether by switching energy supplier, car-sharing or better recycling.